By Margarita Snegireva. Swiss watchmaker Swatch Group said on Friday that 2007 sales rose 18 percent to 5.94 billion Swiss francs ($5.40 billion) and it was optimistic for 2008 after seeing double-digit growth in January. 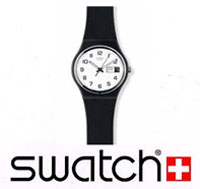 The company also said it expected further growth in 2008 in all business segments despite financial market turbulence.

Swatch is a brand name for a line of wrist watches from the Swatch Group. With its vertical control of the production of Swiss watches its watches and related products is marketing very well. In 1982, Swatch was conceived and it was introduced on the market in Switzerland in March 1983.

Swatch was originally intended to re-capture entry level market share lost by Swiss manufacturers during the aggressive growth of Japanese companies such as Seiko in the 1960s and 1970s, and to re-popularize analog watches at a time when digital watches had achieved wide popularity. The launch of the new Swatch brand in 1983 was marked by bold new styling and design. The quartz watch was redesigned for manufacturing efficiency and fewer parts. This combination of marketing and manufacturing expertise restored Switzerland as a major player in the world wristwatch market. Synthetic materials were used for the watch cases as well as a new ultra-sonic welding process and the assembly technology. The number of components was reduced from some 100 to 51, with no loss of accuracy.