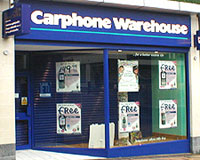 The company has gained recent notice, from the talent show Britain's Got Talent. Paul Potts a Carphone Warehouse local branch manager, won the show, gaining £100,000, a record deal on behalf of Simon Cowell, and the chance to sing at the Royal Variety Performance in front of the British Royal Family.