By Margarita Snegireva. San Francisco home sales reached their record low level for the month amid a steep drop in the number of "jumbo" mortgages issued to buyers. 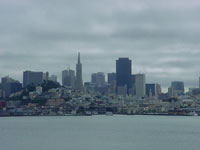 In Alameda County, 983 new and resale houses and condominiums were sold last month, down 38.1 percent from 1,589 sold in December 2006. The median price paid for a home in the county was $540,000, an 8.3 percent drop from $589,000 a year ago. Due to late data availability, Alameda County statistics for last month were extrapolated from the first three weeks of the month.