By Alex Steblinina. A leading Russian maker of crackers and breakfast cereals will soon be bought by Kellogg, the world’s leading cereal-maker. 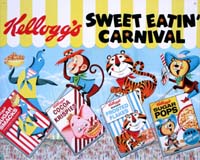 No details of how much it was paid were given.

Kellogg Company (often referred to as simply Kellogg or Kellogg's) is an American multinational producer of breakfast foods, snack foods, cookies, and crackers, with corporate headquarters in Battle Creek, Michigan, USA. Its revenues in 2006 were $10.906 billion.

Kellogg's was founded as the Battle Creek Toasted Corn Flake Company on February 19, 1906, by Will Keith Kellogg as an outgrowth of his work with his brother John Harvey Kellogg at the Battle Creek Sanitarium following practices based on the Seventh Day Adventist religion. The company produced and marketed the hugely successful Kellogg's Toasted Corn Flakes and was renamed the Kellogg Company in 1922.