Capital One slashes its 2007 earnings forecast by 20 percent

By Margarita Snegireva. Capital One Financial Corp. announced that its 2007 earnings will be less than the company has expected because of increased provisions for loan losses and additional legal reserves in the fourth quarter. 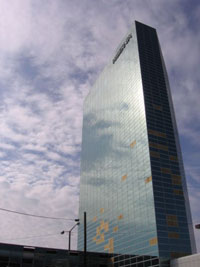 Capital One slashes its 2007 earnings forecast by 20 percent

Capital One Financial Corp. is a McLean, Virginia-based bank holding company specializing in credit cards, home loans, auto loans, banking, and savings products. Founded in 1988 by Richard Fairbank and Nigel Morris, the firm was a pioneer of the mass marketing of credit cards in the early 1990s and is now the fourth largest customer of the United States Postal Service.

In 2002, Capital One won the Wharton Infosys Business Transformation Award for its innovative strategy specifically related to their credit card products. In 2005, Capital One entered the retail banking market with its acquisition of New Orleans, Louisiana-based Hibernia National Bank.

On March 12, 2006, Capital One announced an agreement to acquire Melville, New York-based North Fork Bank for $14.6 billion U.S. dollars. The merger was completed on December 1, 2006. Upon the completion of the merger, the bank is to be renamed as "Capital One Bank".

Capital One said it is taking a $1.9 billion provision for loan losses in the fourth quarter, including about $1.3 billion in charge-offs. The company said it will also add about $650 million to its charge-off allowance because of recent delinquencies in its consumer lending businesses and "continued deterioration" in the approximately $700 million of home equity lines of credit it holds for investment.