One of the biggest clothing retailers Marks & Spencer announced its first drop in sales for over two years. 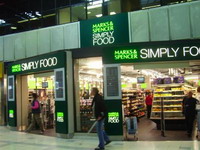 The company’s sales fell by 2.2% in the 13 weeks ending on December 29. And that is the data excluding new store openings and expansions. Sales of general merchandise decreased 3.2%, while food sales slipped by 1.5%. And even high activities in Internet sales (78.0% rise) and in sales abroad (15.1% rise) can’t counterbalance the drop.

Marks & Spencer (M&S) is a British retailer, with 760 stores in more than 30 countries around the world. It is one of the most iconic and widely recognized chain stores in the UK with 520 stores, and is the largest clothing retailer in the country, as well as being a multi-billion pound food retailer. Most of its shops sell both of these categories. It also has a third line of business selling homewares such as bed linen, but this is far smaller than the other two.

The drop in sales of Marks & Spencer added to concerns about the economy and housing market in 2008, high interest rates and rising food and fuel prices that have been weighing heavily on consumers and banks.