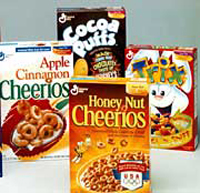 The latest quarter included 13 million in restructuring and related costs and said expenses related to the recall of frozen pepperoni pizza lowered results by 4 cents per share, the company said.

U.S. retail revenue grew to $2.52 billion from $2.44 billion with solid results from the Yoplait division and Nature Valley snacks, while international sales increased to $665.7 million from $544.6 million on strength in Latin America. Bakeries and foodservice revenue climbed to $516.7 million from $480.3 million due to price increases implemented to offset rising input costs.