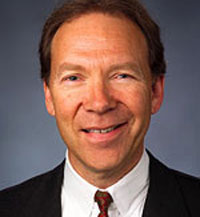 Hesse replaces Gary Forsee, who was ousted from the nation's third-largest wireless provider in October following several quarters of falling subscriber numbers and other operational troubles.

Sprint Nextel Corporation is one of the largest telecommunications companies in the US. With 55 million subscribers, Sprint Nextel operates the third largest wireless telecommunications network in the United States (based on total wireless customers), behind AT&T and Verizon Wireless. Sprint is a global Tier 1 Internet carrier, and, as such, makes up a portion of the Internet backbone. In the United States, the company also operates the second largest wireless broadband network and is the third largest long distance provider.

The company was created in 2005 by the $35 billion purchase of NEXTEL Communications by Sprint Corporation. In 2006, the company spun off its local landline telephone business, naming it Embarq and also completed the $6.5 billion acquisition of Nextel Partners, one of its largest affiliates, which primarily provides Nextel wireless services to more rural markets.

Sprint Nextel has its executive headquarters in Reston, Virginia and maintains an operational and engineering headquarters in Overland Park, Kansas (where the largest number of Sprint Nextel employees are based). Both internally and externally, "Sprint" is an acceptable short name for the company; however, all "walkie-talkie" phones currently being shipped are still branded with the Nextel logo and graphics.