Dollar's bounce: US currency to rally through end of 2007

The dollar is expected to continue to rally through the end of 2007 as investors take profits on short dollar positions and close their books for the year. 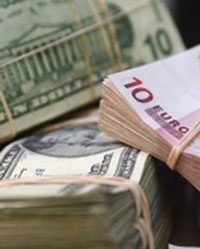 Dollar's bounce: US currency to rally through end of 2007

The U.S. currency's recent advance might encounter a roadblock if the year's final dose of data reminds investors too sharply of economic woes. But the dollar could accelerate again if investors this week cozy up to a new plan by the Federal Reserve to introduce liquidity into financial markets.

Consumer price data released Friday showed US inflation rose to a two-year high of 0.8 percent in November, an ominous reading at a time when the economy is slowing.

The Asian Development Bank is forecasting US growth of 2.2 percent this year and 1.9 percent in 2008, less than the 2.9 percent expansion posted in 2006.

The Fed has lowered its federal funds rate target by one percentage point this year, including the quarter-point reduction announced last week.

Accelerating inflation could limit the scope for further rate cuts by the Fed and so the CPI release has become even more critical," ABN Amro analyst Melinda Smith said.

"A high number will be a mixed blessing for the dollar, and global investor confidence, as it will make Fed policy trickier to manage."

Central banks, whose job it is to keep prices stable, are battling with inflationary pressures while at the same time fighting the ongoing credit crunch sparked by the subprime loans crisis that has persisted since August.

The data exceeded Wall Street forecasts of a 0.6% headline inflation increase and 0.2% core gain, according to a Dow Jones Newswires survey.

The dollar also rose to 113.60 yen, which it hasn't surpassed since Nov. 7, aided by the fourth-quarter tankan report released Friday by the Japanese central bank. It showed that large Japanese companies' business sentiment worsened to its lowest level in two years. The weaker-than-expected data increase, arising from higher costs and global economic jitters, boosted expectations that the central bank won't be able to lift interest rates until well into next year despite a weakening yen.

The dollar's bounce may also be a product of year-end technical factors. As markets begin to thin out toward the end of the year, currencies are more vulnerable to larger shifts. As the dollar breaks through key technical levels, that opens the door to more euro or yen selling, analysts said.