Russian inflation will jump up to 12 percent mark this year. 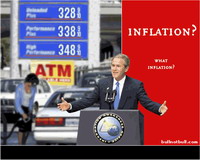 Amid an economic revival that has raised living standards, Russians have been grumbling about price increases that have forced them to spend more on basic commodities such as bread, dairy products and gasoline.

The government's initial inflation forecast was 8 percent, a projection that has been repeatedly revised upward throughout the year.

Speaking at a government meeting, Economy Minister Elvira Nabiullina said her ministry had submitted a raft of recommendations for combating inflation to the government.

Nabiullina said the proposals included measures to promote production in sectors where price rises have most impact on the general population.

In the same report, the ministry raised its projection for gross domestic product growth to 7.6 percent, compared with 6.6 percent last year.

The ministry also reported that salaries rose 15.1 percent this year, while disposable income increased 12.5 percent. It also said the proportion of Russians living below the poverty line dropped to 14.4 percent, from 18.4 percent two years ago.