Steelmaker ArcelorMittal will get the controlling stock of China Oriental Group. 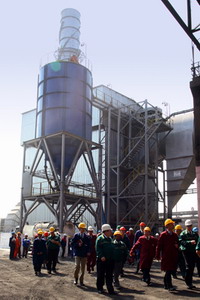 Last month, it agreed to spend US$674 million (463 million EUR) on a 28 percent stake in China Oriental, which makes steel in China's northern Hebei province and in Guangdong to the south.

ArcelorMittal, the world's largest steelmaker with some 10 percent of global output, said it would pay up to 6 billion Hong Kong dollars (US$769 million; 524 million EUR) to become the company's major shareholder by buying up shares over time owned by the current controlling shareholders, who include China Oriental Chairman Han Jungyuan.

It refused to say how it arrived at that figure, merely saying it would offer HK$6.12 (78 US cents; 53 euro cents) for each China Oriental share and an additional HK$0.235-HK$0.706 (3 US cents-9 US cents) for the controlling shareholders.

It set no end date for when it expects to complete the purchase of the extra stake. The deal will need regulatory clearance from the Chinese authorities.

In return, ArcelorMittal will share its technology and know-how "with the aim of transforming the company and its subsidiaries into a leading producer of heavy sections in the People's Republic of China" that will sell steel to the booming construction industry.

"Strengthening our position in the fast growing PRC (Chinese) market is one of the important elements in ArcelorMittal's strategy," Lakshmi Mittal, president and CEO of ArcelorMittal, said in a statement.

The Luxembourg-based steelmaker has been eager to expand into China as its booming economy calls out for more steel. But a bid for a 38 percent stake in mid-sized steelmaker Laiwu Steel Corp., also based in Shandong, has stalled for years, with Chinese regulators demanding a higher price to let the deal go through.

The deal is one of several where European companies claim they are not being allowed to build up major stakes in industries China views as strategic.

Still, ArcelorMittal also has a 29 percent stake in Hunan Valin Steel Tube and Wire Co. Ltd. and 12 percent in a joint venture with Baosteel-Nippon Steel to make steel for the car industry.