The US trade deficit increased to the highest level in three months. Record oil prices and a flood of toys and other imports from China swamped another solid gain in American exports. 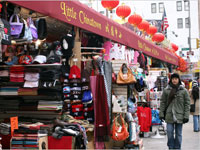 The Commerce Department reported Wednesday that the deficit for October increased to $57.8 billion, the highest level since July and 1.2 percent above the September imbalance, the AP reports.

As Pravda.Ru previously reported the U.S. trade deficit narrowed more than forecast in August as the falling dollar stimulated record foreign demand for American products from wheat to electric generators.

The $57.6 billion trade gap was the smallest since January, the Commerce Department said in Washington. The surge in exports may also be helping prop up the U.S. job market in the face of the housing slump: Unemployment-benefit claims last week dropped more than predicted, the Labor Department said.

The increase in shipments abroad means economic growth in the third quarter probably exceeded 3 percent, according to new estimates by Morgan Stanley and Bank of America Corp. That's faster than the 2.7 percent anticipated by economists surveyed by Bloomberg News. As recently as August, the forecast had been as low as 2.4 percent.

Since the 1970s the U.S. moved from a trade surplus to a deficit position, as Europe and Japan began to compete effectively with the U.S. in a range of industries. There are many ways in which trade has injured U.S. workers since then. First, deterioration in the trade balance (the difference between exports, which create jobs, and imports, which eliminate domestic employment) has reduced employment, especially in manufacturing and other industries producing traded goods

The trade surplus of the 1960s was transformed into a deficit that reached 2.9% of GDP in 1998. This deficit will grow rapidly in the future as a result of the continuing global financial crisis. Although financial markets are beginning to recover throughout the world, the real economies of many developing countries and Japan remain mired in recessions. For example, reliable private sector reports show that unemployment in Sao Paulo, Brazil currently exceeds 20%.