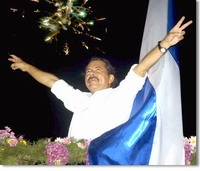 In a televised speech late Wednesday, Ortega said the decision stemmed from a dispute with Esso, owned by Texas-based ExxonMobil.

In August, a judge ordered the seizure of an Esso storage terminal, saying the company owed US$3 million (2 million EUR) in taxes. The company has denied owing any taxes.

Shortly after the terminal was seized, Energy Minister Emilio Rappaccioli said the state-run Petroleos de Nicaragua, or Petronic, didn't have the storage capacity to hold oil from Venezuela and needed to use the terminal to store 120,000 barrels.

The terminal was eventually returned to Esso, but Ortega said Wednesday the company wasn't cooperating in meetings to solve the country's energy shortages and rolling blackouts.

"They are acting like true mercenaries, speculators, bleeding the people," he said of Esso executives.

Ortega added that the shortages were "a matter of national security, and we are arriving at a critical point. We must make decisions."

Esso's general manager in Nicaragua, Joaquim Magalhaes, said he wasn't sure what Ortega's nationalization plan would entail, and that the company was waiting for more details.

"It makes clear that, at any moment, the government could nationalize any activity it sees in its interest," he said.

In January, Ortega signed an agreement to buy 10 million barrels of Venezuelan crude, but rumors persist that Esso has refused to refine it. Magalhaes denied that, too.

Ortega imposed disastrous state controls on Nicaragua's economy during his first run as the country's leader in the 1980s. Since his return to office in January, he has maintained relations with the U.S. and promised to protect private property and foreign investment, while also cozying up to one of the United States' most outspoken critics, Venezuelan leader Hugo Chavez.