The lack of budget funds may cause the cutting of food rations that in its turn would pose hardship for the majority of Iraqis who depend heavily on the Saddam Hussein-era program. 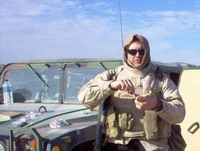 The comments by Trade Minister Abed Falah al-Sudani came as critics have called for the costly system to be revised or eliminated. Al-Sudani said two-thirds of the some 26 million Iraqis rely on the rations.

"More than 60 percent of the Iraqi people depend on the food distributed with the ration card ... any change in the ration items will create new problems that will add new burdens on families," al-Sudani said in a statement.

He said his ministry had requested a US$7 billion for the program in next year's budget but only received US$3 billion, a move that could force it to cut the number of items distributed from 10 to five.

The system under which all Iraqis are issued ration cards allowing them to buy 10 items - sugar, flour, rice, powdered milk, cooking oil, tea, beans, baby milk, soap and detergent, for a nominal fee has long been a subject of debate in Iraq.

A ministry official, speaking on condition of anonymity because he wasn't authorized to discuss the matter, said a reduction was a possibility but no clear decision had been made yet.

It was implemented under Saddam to help Iraqis cope with economic hardships due to U.N. sanctions imposed on the country after his 1990 invasion of Kuwait. But there have been calls to eliminate or limit the scope of the system after the 2003 U.S.-led invasion that ousted Saddam and freed Iraqis from economic restrictions.

Al-Sudani pointed out that some families sell the rations to earn money for other needs. Supporters also have warned that the cancellation or even reduction of the ration system could lead to an increase in market prices that would eventually effect all Iraqis.

Al-Sudani said his ministry would make gradual reductions in the system as opposed to an abrupt cancellation to avoid "a big dilemma."

"The exceptional circumstances the Iraqis are undergoing require us to keep the ration card because it is the only fair thing that can reach all Iraqi families," said the minister according to the statement.