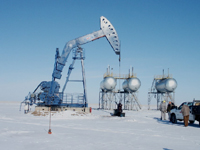 Other delegates said the 13-nation group will meet again in January to review that decision.

The announcement by Shokri Ghanem was still to be officially confirmed but appeared to reflect OPEC concerns that it would be counterproductive to raise production ceilings at a time when prices have retreated about 10 percent from recent record highs.

It also seemed to suggest that the Organization of Petroleum Exporting Countries now views prices near or above US$90 - an increase of about US$40 since the start of the year - as acceptable. Still, the decision to meet again in January for a review of winter demand and the world economy indicated that the organization was prepared to increase quotas should prices go much higher.

"We've agreed to keep production unchanged," Ghanem told Dow Jones Newswires. News of the planned January meeting came from other delegates, who asked not to be named because they were not authorized to comment to the media.

Chakib Khelil, Algeria's oil minister, who takes over as OPEC president in January, suggested that crude's recent dizzying climb was due to factors other than supply and demand, telling reporters that boosting output levels now is "not going to have an impact on prices." Ahead of the meeting, ministers had blamed speculation and the weak dollars as key factors driving up prices.

Just hours before Ghanem spoke, a three-nation OPEC advisory panel foreshadowed the decision by recommending a maintenance of the status quo.

OPEC oil ministers went into the meeting facing a tough choice. Agreement on an increase in output ceilings would have reassured volatile markets that have seen wild swings over the past few weeks, including a nearly US$10 drop over five days last week that was the largest ever in nominal terms.

But such a decision could have sharply accelerated oil's decline in price - which, if it continues long term would cut into OPEC revenues already suffering from a weak dollar.

An OPEC decision to raise output just before the 1997 Asian financial crisis led to oil prices plummeting from US$20 to US$12 a barrel - a development ministers appeared determined to avoid amid uncertainty on the state of key world economies.

Ahead of official confirmation of an OPEC decision, Oil analyst John Hall of John Hall Associates in London said he would be surprised by any move not to up production quotas now.

Still, he said that any OPEC decision to meet in January should cap prices at around the US$90-95 level as traders wait to see what that gathering decides.

"There is uncertainty as to what they're going to do," he said. "And that level of uncertainty will prevail until we know ... what they will do and how they implement what they decide to do."

Reduced demand growth forecasts from both OPEC and the International Energy Agency have pushed prices down recently, along with the extra oil reaching markets from the last OPEC production increase and expectations of increased output from the United Arab Emirates.

A new U.S. intelligence report concluding that Iran halted its nuclear weapons development program in 2003 is also helping to keep a lid on the market.

An OPEC decision in September to increase output levels by an extra daily 500,000 million barrels failed to keep a lid on demand and prices up until recently, when the market turned downward, partly in anticipation that the ministers would repeat that decision in Abu Dhabi.

United Arab Emirates and Qatar among those suggesting there is no need to boost supplies.

The 10 OPEC members bound by quotas traditionally produce above them, but an AP Dow Jones Newswires survey showed the group generally in line with the overall limit, pumping out an estimated 27.2 million barrels a day.

OPEC's total production is about 31.5 million barrels daily, factoring in Iraq and Angola, which are not under output restraints, said the survey. OPEC oil accounts for about 40 percent of the world's needs.

But some analysts suggested hidden OPEC oil was reaching the market.

"It's not whether OPEC raises production or not - they already have - but it is whether or not they legitimize that overproduction by raising their quotas," wrote Phil Flynn, an energy analyst with Alaron Trading Co., in a research note.

"US$90 a barrel is the line in the sand and if oil is below US$90, like I expect it will be, then OPEC will not raise their quota," Flynn wrote. "If oil starts driving to above US$90 a barrel then it's possible that OPEC will raise quota to legitimize over production. But it will not mean any more real barrels of oil."