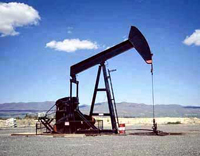 As OPEC members promised to keep output ceilings steady, oil prices rose sharply to around US$90 a barrel Wednesday. The prices were also supported by the expectations that a weekly U.S. petroleum supply report due later Wednesday would show a small decrease in crude inventories.

Other delegates said the 13-nation group will meet again in January for a review of winter demand and the world economy, which seemed to indicate that OPEC was prepared to increase quotas should prices go much higher.

Light, sweet crude for January delivery added US$1.34 to US$89.66 a barrel in electronic trading on the New York Mercantile Exchange by midday in Europe. In London, January Brent crude futures rose 47 cents to US$90.00 a barrel on the ICE Futures exchange.

Ghanem appeared to reflect OPEC concerns that it would be counterproductive to raise production ceilings at a time when prices had retreated about 10 percent from recent record highs.

It also seemed to suggest that OPEC now viewed prices near or above US$90 - an increase of about US$40 since the start of the year - as acceptable.

A number of reports have suggested that several OPEC countries are already exceeding their output quotas.

With the OPEC decision "putting a floor on the price decline," analysts said other issues would determine the chances of a new rally in the coming days.

"The focus will now shift back to the weekly statistics and the Fed meeting next week and its repercussion for the dollar index," said Olivier Jakob at Petromatrix in Switzerland.

Traders are also waiting for the U.S. Department of Energy's weekly petroleum inventory report, which is closely watched in the energy markets as a guidepost for demand.

U.S. crude stockpiles are likely to fall by 800,000 barrels and gasoline stocks to grow by 900,000 barrels, according to an average estimate of analysts surveyed by Dow Jones Newswires.

Refinery use is expected to rise 0.2 percentage point to 89.6 percent of capacity, according to the survey. Distillate stocks, which include heating oil and diesel fuel, are expected to drop by 300,000 barrels, analysts predict.