Plan to boost wages for Florida tomato pickers may fail

The attempts to boost wages for Florida tomato pickers may fail under pressure from Burger King and a growers group, the latter threatening $100,000 (67,526 EUR) fines against any members who participate. 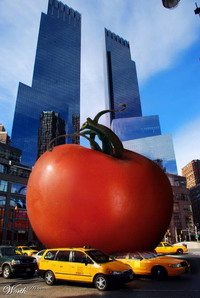 Plan to boost wages for Florida tomato pickers may fail

The Coalition of Immokalee Workers fought for years to persuade fast-food giants McDonald's Corp. and Taco Bell owner Yum Brands Inc. to pay a penny more per pound (450 grams) of Florida tomatoes - with their suppliers passing the money on to farm workers. The agreements were mostly symbolic, affecting only a tiny fraction of Florida tomato pickers, but they paved the way for raising wages and strengthening farm worker rights across the industry.

So the coalition next set its sights on Burger King, but the Miami-based company has joined the Florida Tomato Growers Exchange in opposing such a deal.

The growers' exchange maintains the agreements may violate antitrust laws, though it has declined to offer specifics. It threatened members that accept the deal with $100,000 (67,526 EUR) fines, three independent sources close to the exchange told The Associated Press.

Exchange spokesman Reggie Brown refused to discuss the fines but called the coalition agreements "un-American" because they allow a third party to set wages. He said the industry will instead continue to develop its own programs to monitor worker treatment and food safety.

Several antitrust experts say the growers' association may be the one violating antitrust laws by banning its members' participation.

"This exchange is limiting one way in which these growers can compete for the business of these major fast-food contracts," said Stephen Ross, a Pennsylvania State University law professor. "The only antitrust violation I see is the growers' response."

For the backbreaking labor of picking tomatoes, Florida workers earn about 45 cents per 32-pound (14.5-kilogram) bucket. That can mean upward of $11 (7.43 EUR) an hour for those who hustle to fill more than 200 buckets a day. But work is not guaranteed, and tomato pickers get neither health insurance nor overtime. Most field workers are immigrants, many of them here illegally.

If the McDonald's and Yum Brands deals are adopted industrywide, worker wages would essentially double. Yum Brands says it is still committed to the coalition, yet after two successful seasons, its suppliers opted out this year. McDonald's has yet to find any supplier who will participate but will continue to buy Florida tomatoes either way.

Undeterred, the Immokalee coalition is still targeting Burger King, organizing a 9-mile (14 1/2-kilometer) march Nov. 30 from downtown Miami to the company's headquarters, with workers, students and community groups from around the country.

"It's more important now than ever," said Lucas Benitez, the coalition's co-founder, as he recently chatted up tomato pickers, their clothes and hands stained a brownish green from dirt and pesticides.

"There's no one company that buys the majority of tomatoes that we can just pressure to change this industry. With each agreement, we are building a house brick by brick," Benitez said.

While wages have been stagnant for decades, so has the price of tomatoes. Tomato growers are facing tough times with competition from Mexico, stricter food and safety regulations and concerns about immigration raids. At least two growers are not planting this year and a third says this is his last.

Tomato production may be down, but restaurant and grocery chains have to buy fresh tomatoes from the state in the winter months, the coalition says.

Under the Yum Brands agreement, the company split the bonus among all of its suppliers' field hands. An independent accountant cut the checks, and the growers passed them out. The deal also allowed the coalition to investigate complaints about labor violations, yet it has not filed any since it signed the Yum Brands agreement in 2004.

Burger King Vice President Steve Grover says the deal sounds fishy, despite two years of negotiations with the coalition and offers from Yum Brands to go over details. Company officials have repeatedly insinuated the coalition is taking the extra money, even after Yum Brands and The Carter Center, an Atlanta human rights group that helped facilitate the deal, dismissed the allegations.

Meanwhile, the growers and Burger King recently teamed up to offer media tours of tomato fields to counter the coalition's allegations of below poverty-level wages and abuses of some workers.

Negotations appear to be at a standstill, although both sides said they would be willing to talk.

The question of whether the growers association has violated antitrust law is tricky.

An exemption to antitrust law exists to allow agricultural cooperatives to set prices during tough times, said Hannibal Travis, a Florida International University law professor. But he said the exemption would not apply if the cooperative is attempting to squelch legitimate forms of competition.

State and federal officials declined to comment on whether they were investigating the issue.

Grover said Burger King is worried about being held liable for the workers.

"We're in the hamburger business, not the agriculture business," he said. "And we can't have several thousand migrant farmers on our payroll."