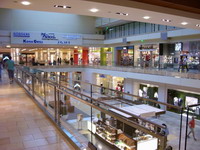 The 31-year-old tourist from Belfast , Northern Ireland , came to shop.

First, the Apple store, where he bought an iPod Touch and iPod Nano. Then Macy's, where he snatched up a bundle of coats, belts and wallets.

Branney was just one of many Europeans who descended on New York this weekend to partake in the post-Thanksgiving shopping scrum and take advantage of a very weak dollar.

Their economic presence was being felt all over the city as the powerful British pound surged to more than $2 and the dollar hit a new low against the mighty euro - which was trading at a record $1.4966 on Friday.

Ed Schmults, CEO of toy retailer FAO Schwarz, estimated that foreigners will make up about one third of customers at the flagship Fifth Avenue store this holiday season, compared to about 25 percent last year.

The retailer started selling duffel bags for $20 (13.50 EUR) last week at the Manhattan location to help tourists carry their purchases.

"They needed something for the loot," he said.

Like Branney, Alex Watson, 17, and Amy Thompson, 18, timed their visit from Liverpool , England to coincide with the deep discounts offered on the day after Thanksgiving.

The two young women were also in a buying frenzy, loaded down with several expensive purses and beauty products as they surveyed Macy's tempting shelves.

"I love it," Thompson said. "It's amazing," Alex concurred.

Over on Fifth Avenue at the Circuit City, Ashlee Clifford, 26, of Northern Ireland clutched a Nintendo game system and a fraying list of items - requests from friends after Clifford told them she'd be in America for Black Friday.

"Everything is half price for us," Clifford said, referring to the buying power of her own currency. "It's absolutely madness."

Back at Macy's, Branney was showing no signs of fatigue, even after his visit to the Apple store. He had spent Thanksgiving resting so he'd be at full shopping strength, getting up at 4 a.m. to hit the stores.