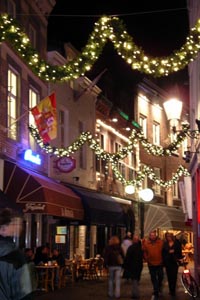 As the holiday shopping season starts, U.S. retailers are trying to attract shoppers’ attraction with midnight openings and a blitz of promotions and discounts.

Stores are counting on hordes of shoppers who have been pulling back in recent months amid a challenging American economy to snap up bargains. But merchants need them to keep coming back throughout the holiday season to make their sales goals.

"Retailers are worried because they are not sure what is going to grab the customers' attention," said C. Britt Beemer, chairman of America's Retail Group. "Everybody believes that early specials are the most successful retail events of the year."

Wal-Mart Stores Inc., the world's largest retailer, is throwing open its doors at 5 a.m., offering such specials as a Polaroid 42-inch LCD HDTV for US$798 (EUR538) and a US$79.87 (EURO 53.86) Sony digital camera. From 5 a.m. to 12 noon, Toys "R" Us Inc. is offering 101 so-called door buster deals on such toys as Mattel Inc.'s Barbie styling set and Hasbro Inc.'s FurReal interactive jungle cat toy. That is four times the number it offered last year.

A growing number of malls opened at midnight. CompUSA Inc. opened on Thanksgiving Day for the second year in a row.

Julie Burke scanned the Internet to find the stores with the best bargains on wide-screen televisions and laptop computers. She also stressed the importance of arriving early.

"This kind of stuff, if you're not there when the door opens, you miss out," she said at the Best Buy electronics retailer in Arlington, Texas.

Realizing that the holiday shopping season would be challenging, stores started discounting weeks ago, with such gimmicks as door busters and expanded hours. While top luxury stores like Saks Fifth Avenue continue to do well, merchants that cater to middle and lower income shoppers have been suffering as consumers struggle with higher gas and food prices as well as a slumping housing market.

Awa Thiam of Indianapolis said her annual raise "is not enough to keep up with the cost of life." She said "gas is killing me," and that she plans to cut back on buying items that "are not necessary for me."

Analysts do not believe early discounting in October will take away the momentum of the Thanksgiving weekend. While Black Friday - so named because it is generally when retailers move from losses to profits - is expected by some analysts to be the busiest day of the season, it is not a predictor of how retailers will fare in the season overall. It does set the tone, though, since what consumers see that day influences where they will shop for the rest of the year.

Beemer noted that if shoppers walk into a store on Black Friday and like what they see, they will more likely go back during the Christmas season.

"This is their biggest chance to win at retail during Christmas season," Beemer said.

Last year, retailers had a good start during the Thanksgiving weekend, but many stores struggled in December and a shopping surge just before and after Christmas was not enough to make up for lost sales.

This year, analysts expect sales gains to be the weakest in five years. Washington-based National Retail Federation predicted that total holiday sales will be up 4 percent for the combined November and December period, the slowest growth since a 1.3 percent rise in 2002.

Holiday sales rose 4.6 percent in 2006 and growth has averaged 4.8 percent over the last decade.