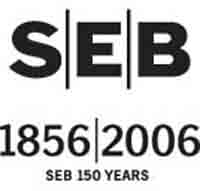 The buy will help it boost its presence in Eastern Europe, it said.

Integration is expected to start next year, pending regulatory approvals.

SEB Chief Executive Annika Falkengren said the "consolidation within one of the fastest-growing banking markets in Europe offers SEB continued opportunities for growth in the region."

SEB, the core holding of the powerful Swedish Wallenberg family, was one of the first Nordic banks to establish a presence in the Eastern European country with the acquisition of small Ukrainian Bank Agio in 2005.

Its expansion in the region, starting in the Baltics in the late 1990's, has mainly been driven by the growing business of SEB's corporate customers in the Nordic home markets, the Baltic countries and in Germany.