Athletic apparel and equipment maker Adidas AG said Thursday that its nine-month net profit was up 13 percent, which it said was the result of lower expenses and an increased operating profit. 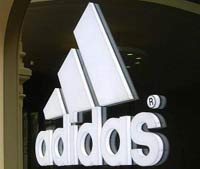 The Herzogenaurach-based company, which is second to Nike Inc. in terms of market reach, said it earned EUR530 million (US$780.27 million) in the first nine months of the year, compared with EUR469 million a year earlier, and ahead of the EUR517 million (US$761.13 million) that analysts polled by Dow Jones Newswires had forecast.

Sales rose about half a percent to EUR7.88 billion (US$11.6 billion) in the January-September period, compared with EUR7.84 billion in the year-ago period, a soft increase pinned to slower sales in the United States and effects of the rising euro, which hit a record high of US$1.4730 on Wednesday. Analysts had forecast sales of EUR7.91 billion (US$11.65 billion).

The company did not disclose its third-quarter figures.

Chief Executive Herbert Hainer said the company, which provides clothing, uniforms and equipment for a variety of sports, ranging from soccer to track and field, expects its overall net profit to rise 15 percent for 2007.

"Our group is set for continued growth in the rest of 2007 and beyond," he said in a statement.

The company said that its order intake for the Adidas brand, a key measure that analysts use as a barometer to divine future sales, was up 16 percent in the quarter. Orders for Reebok, which Adidas bought in a US$3.8 billion (EUR2.58 billion) deal in 2006, were down 2 percent.

Separately, the company said that Henri Filho, 76, resigned as chairman of the company's supervisory board, the equivalent to a U.S. board of directors, for personal reasons late Wednesday.

He was replaced by Hans Friderichs, 76, the board's deputy chairman.