Overnight boom in oil futures does not save its positions 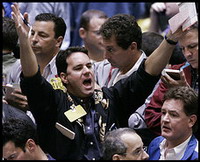 Overnight boom in oil futures does not save its positions

The Commerce Department's report that consumer spending rose by 0.3 percent in September, less than the 0.4 percent increase analysts expected, raised the prospect of a slowing economy that could depress demand for oil. And downbeat news about manufacturing came from the Institute for Supply Management, which said industrial activity grew in October at the weakest pace since March.

Still, oil prices have surged 20 percent in one month, and when any market rises that far that fast, investors tend to sell to lock in some of their gains.

The Federal Reserve's decision to cut interest rates a quarter-percentage point on Wednesday got a mixed reception in the oil market but probably contributed to some of Thursday's selling, analysts said. On one hand, interest rate cuts generally support oil prices because they tend to send the dollar downward. Oil futures have been driven to record levels in recent months partly because they offer a hedge against a weak dollar.

On the other hand, the Fed cut rates because it is concerned about the economy. Oil investors worry that the problems in the mortgage and credit markets could spread, affecting the wider economy and cutting demand for oil and petroleum products.

"People are questioning the strength of the economy, and why do we keep cutting interest rates?" said James Cordier, president of Liberty Trading Group in Tampa, Florida.

Late in the day, France decided to release a little more than 2 million barrels of crude from its strategic petroleum reserve to relieve a short-term supply crunch, Dow Jones Newswires reported. Oil futures dropped nearly $1 on that news before recovering somewhat.

Light, sweet crude for December delivery fell $1.04 to settle at $93.49 a barrel on the New York Mercantile Exchange after rising as high as $96.24, a new trading high, overnight. However, trading was volatile, as prices dropped more than $2 a barrel a several times before rebounding to almost break even.

Crude prices are within the range of inflation-adjusted highs set in early 1980. Depending on the how the adjustment is calculated, $38 a barrel then would be worth $96 to $103 or more today.

Many investors believe tight supplies will drive crude prices to $100 a barrel, or higher, and look at price declines as buying opportunities, said Phil Flynn, an analyst at Alaron Trading Corp. in Chicago.

"I think the volatility is going to increase in the next few days," Flynn said.

Prices were also pressured by China's decision to raise gasoline and diesel prices by 10 percent, which could cut demand.

December natural gas rose 30.7 cents to settle at $8.637 per 1,000 cubic feet on forecasts for cold November weather in the Midwest and Northeast. Investors shrugged off a government report that gas inventories rose last week by 66 billion cubic feet, more than analysts had expected, and stand at record highs.

In London, December Brent crude futures fell 91 cents to settle at $89.72 a barrel.