Auto sales show increase of interest in Toyota and Nissan 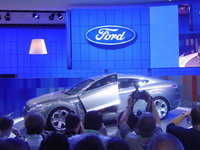 Auto sales show increase of interest in Toyota and Nissan

Ford Motor Co.'s sales declined to 194,762, extending a weak performance that the automaker blames in part on pulling back on low-profit sales to rental car companies.

Ford's car sales dropped 26 percent compared with October 2006, while its truck sales were up 1.2 percent.

Toyota Motor Corp., meanwhile, said it sold 197,592 vehicles in the U.S. last month. Its car sales rose 2.7 percent and its truck sales were up 6.9 percent. Toyota is expected to overtake Ford as the No. 2 automaker in U.S. sales after General Motors Corp. this year.

"Showroom traffic was strongest from the Midwest through the Gulf states," Jim Lentz, Toyota's top U.S. sales official, said in a statement. "In Southern California, wildfires crimped a key market already impacted by the housing downturn."

Auto analysts predicted another slow sales month industrywide, with Ford falling hardest. As they have for months, jittery consumers have put off big-ticket purchases in response to the troubled housing market and high gas prices.

Nissan Motor Co. posted a sales increase of 13 percent for the month, largely due to strong sales of the new Altima sedan and Versa subcompact. Nissan said its new Rouge crossover also was exceeding expectations, with more than 5,000 sold in its first full month on the market.

The Associated Press reports unadjusted figures, calculating the percentage change in the total number of vehicles sold in one month compared with the same month a year earlier. Some automakers report percentages adjusted for sales days. There were 26 sales days last month and 25 in October 2006.