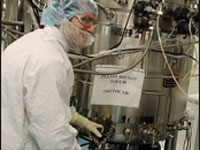 The company also raised its forecast for full-year revenue growth of 30 percent. Shire had previously forecast growth of "at least 25 percent."

"We have continued to execute on our strategy as a specialty biopharmaceutical company and made significant progress with all of our product launches," said Chief Executive Matthew Emmens.

The company makes other drugs to treat attention deficit hyperactivity disorder, such as Vyvanse and Daytrana, as well as human genetic therapies and gastrointestinal and renal disease treatments.