Philippine troops on Monday pressed the last 3,000 villagers who have refused to heed government warnings to leave the danger zone around a volcano that experts say is ready to erupt. 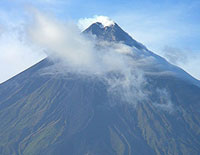 Tens of thousands of people have already been evacuated from the foothills of Mayon, which on Monday emitted lava fountains, powerful booming noises and other signs of an approaching eruption. But authorities are having trouble keeping villagers away from their homes and farms, said Gov. Joey Salceda.

"There are people who have been evacuated three times, and we sigh: 'You again?' " said Salceda of central Albay province. "We've been playing cat and mouse with them."

After a week of puffing out ash and sending bursts of lava trickling down its steep slopes, the 8,070-foot (2,460-meter) mountain overlooking the Gulf of Albay and Legazpi city shook with nearly 2,000 volcanic earthquakes and tremors between Sunday and Monday, state volcanologists said, The Associated Press reports.

Philippine authorities raised the alert status to Level 4 on Sunday which "means that a hazardous explosive eruption is possible within days," according to the Philippine Institute of Volcanology and Seismology.

"Audible booming and rumbling sounds were first reported in the eastern flank of the volcano" Sunday afternoon, and 1,942 volcanic earthquakes were detected by the institute's seismic network in the 24 hours to 7 a.m. local time on Monday (6 p.m. ET on Sunday), the institute said.

One was "an explosion-type earthquake" that launched a cloud of ash about 500 meters (1,640 feet) into the air, according to the statement.

The Institute recommended extending already-established danger zones of 8 km (4.9 miles) south of the summit and 7 km (4.3 miles) north of the summit of the the 8,077-foot volcano, CNN reports.