EU Calls on Future Palestinian Capital Have No Practical Weight 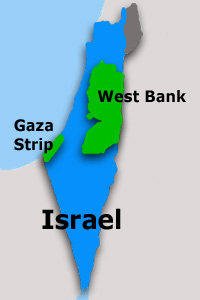 EU Calls on Future Palestinian Capital Have No Practical Weight

"It appears that the Palestinians have adopted a strategy of delaying negotiations with Israel, and this is in order to refrain from meeting the demands of Israel and the international community, which require compromises on the Palestinian side," Netanyahu was quoted as telling his ministers at a security cabinet meeting.

He warned that the PNA is "making a mistake that they must understand: There will not be a real solution without direct negotiations with Israel, within whose framework we will reach accords and agreements."

The accusation came as the PNA still refuses to resume peace talks with Israel two weeks after Netanyahu announced a 10-month moratorium on new construction projects in West Bank settlement in a good-will gesture aimed to revive the peace process that has stalled for over a year, Xinhua reports.

Meanwhile, the European Union called on Israel yesterday to make Jerusalem the capital of a future Palestinian state, in reproof of the current Government’s rejection of such an outcome. “If there is to be a genuine peace, a way must be found through negotiations to resolve the status of Jerusalem as the future capital of two states,” the 27 foreign ministers said.

The joint statement was milder than a draft by Sweden, holder of the EU presidency, leaked two weeks ago, which proposed that the EU recognise east Jerusalem now as the future Palestinian capital.

The EU has long said that it does not recognise Israel’s annexation of east Jerusalem in the 1967 war. However, yesterday’s call still represents a rebuke of Binyamin Netanyahu, the Prime Minister.

Israel considers Jerusalem its indivisible capital. While some prime ministers have hinted at possible compromise as part of a final deal with Palestinians, Netanyahu is not one of them. He coupled his reluctant ten-month freeze on settlements in the West Bank with a plan for new homes on Jerusalem’s fringe on land captured in 1967, and has refused to curb Jewish building in east Jerusalem , Times Online reports .

In the meantime, according to Brig. Gen. (ret.) Shlomo Brom, a senior research associate at the Institute for National Security Studies and an expert on Israeli-Palestinian relations, intensifying calls from both the European Union and the Palestinian Authority that east Jerusalem be recognized as the capital of a future Palestinian state hold little if any practical weight.

Brom told The Jerusalem Post on Tuesday that such calls, including Tuesday's passing of a European Union resolution to recognize Jerusalem as the capital of both Israel and a future Palestinian state, were "purely political" and had few additional implications.

"The whole [idea of recognizing east Jerusalem as a Palestinian capital outside the framework of negotiations with Israel] is just political," Brom said. "It has no other meaning except that an important part of the West, namely the Europeans, think that this is what should be done. There are no practical implications." Additionally, Brom said, given the fact that Israeli control extends over the entirety of the city, there was little the Palestinians could do unilaterally to even lay the groundwork for such a move.

"I don't see how a unilateral declaration of a Palestinian state [and therefore Palestinian control over east Jerusalem] is physically possible," Brom said. "In fact, it's impossible. Israel controls all of Jerusalem, so [the Palestinians] can't really do anything on their own to move closer to that," Jerusalem Post reports.