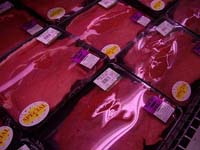 The new cooperation pact between Russia and the E.U. was blocked by Poland dissatisfied with ban on its meat. Now, Russia 's agricultural oversight agency said an agreement was reached Wednesday on inspections of the meat.

Officials from Russia, Poland and the EU's executive Commission, meeting in Moscow, reached an informal agreement under which inspections of Polish producers hoping to export meat to Russia could begin next week, the agency Rosselkhoznadzor said in a statement.

Russia has barred meat imports from Poland since late 2005, citing health concerns. The ban, which has coincided with a deepening chill in ties between Russia and Poland, led Warsaw to veto the start of talks on a new EU-Russia partnership agreement aimed at deepening cooperation.

Russian officials have expressed hope the recent change of government in Poland could ease the situation.