Being 23rd out of 24 teams in the League Championship when Roy Keane joined as a rookie coach Sunderland was promoted to the Premier League on Sunday. 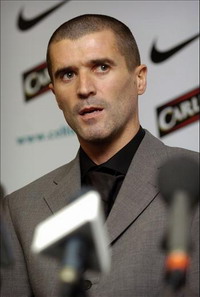 "He has astonished everyone and done it in record time," Sunderland chairman Niall Quinn said.

Sunderland was guaranteed one of two automatic promotion places after Derby lost 2-0 at Crystal Palace on Sunday.

Birmingham leads the League Championship with 86 points, followed by Sunderland with 85 and Derby with 81. There is one round left.

Keane put aside a previous bitter feud with Quinn when he was appointed manager of the Black Cats in August 2006. Quinn headed a consortium that took over the struggling club in the close season and actually started the season as manager.

Quinn, who scored 69 goals in seven seasons with the Black Cats, struggled and four of the first five games were lost.

Quinn then fired himself - and took a gamble with Keane, who had once branded his new boss a "muppet" after a series of clashes. At the 2002 World Cup, Keane was sent home early from Ireland's squad for attacking his country's poor preparations.

But Keane was a proven winner. He was instrumental in Manchester United winning seven league titles and four FA Cups from 1993 to 2005, and before retiring with a hip injury, he helped Celtic to the Scottish league title in 2006.

Sunderland started with a 2-1 victory at Derby and Keane also persuaded Dwight Yorke to join from Sydney FC.

But it took until January for Sunderland to break into the top half and start a steady rise up the table.

Keane rejuvenated the club with a firm approach. When three players were late for the team coach ahead of a trip to Barnsley in March, Keane simply left them behind.

"Just him being in charge of the Sunderland club has given the guys that extra drive that they need to try to be the player he was," midfielder Carlos Edwards said.

"He won't accept second best at anything. I think the guys go out there with one intention, to do their best."

Keane heard about Sunderland's promotion Sunday while he was out walking his dog.

Wrestling the title away from Birmingham could be the perfect conclusion for Keane's season.