Prince Frederic von Anhalt has sued Fox and Bill O'Reilly after the talk show host called him a fraud for claiming he could be the father of Anna Nicole Smith's baby. 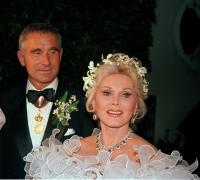 The claim stems from comments the talk show host made during a Feb. 22 segment of "The O'Reilly Factor."

"Look, this guy's a fraud," O'Reilly said, according to a transcript of the show posted on the network's Web site. "We know he's a fraud. But let's - what I want to talk about is - he's done. His credibility is - is finished."

Since the show aired, von Anhalt said people give him dirty looks when he goes to the grocery store.

"They say, 'Look, here comes the fraud,"' he said. "I get lots of e-mails from people bad-mouthing me. It's very embarrassing."

An after-hours message for a spokesman at News Corp., which owns Fox, was not immediately returned.

Last month, von Anhalt filed legal documents seeking a DNA test to determine if he is the father of Smith's baby girl, Dannielynn. He has said he carried on a decade-long affair with the Playboy centerfold, the AP said.

Two other men also claim to be the father, Smith's former boyfriend Larry Birkhead and her most recent companion, Howard K. Stern, whose name appears on the baby's birth certificate.