Spears taken by ambulance from her house 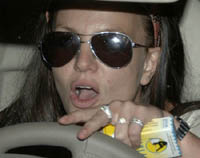 Spears taken by ambulance from her house

Britney Spears keeps attracting attention of her fans and press. She was taken by ambulance from her house, police told the AP.

Britney was taken to hospital to get help, but no details were given.

Her marriage to Kevin Federline in 2004 received much publicity, as did the birth of her first child, Sean Preston, in 2005 and her second child, Jayden James, in 2006. The couple's divorce in November of the same year was highly publicized, followed by an ongoing legal battle for the custody of their two children.