NATO's secretary general called on Russia and Georgia on Thursday to calm their conflict, and said he wanted to deepen the relationship between Moscow and the alliance because Russian involvement was necessary to solving many conflicts. 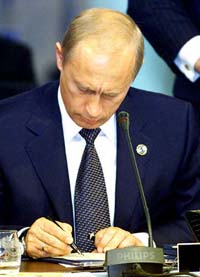 "There is no direct NATO role here but I ask ... that the conflict and the discussion surrounding the areas of South Ossetia and Abkhazia should be solved in a peaceful way," Jaap de Hoop Scheffer told reporters at a joint briefing with Russian Defense Minister Sergei Ivanov.

Abkhazia and South Ossetia have run their own affairs without international recognition since breaking away from government control in bloody wars in the early 1990s, and are seeking independence or a union with Russia.

Russia has granted citizenship to most residents of Abkhazia and South Ossetia, and has backed them in their disputes with Georgia, but stopped short of recognizing their sovereignty a move that would be certain to draw an international outcry. Georgia hopes to join NATO in 2008.

"Russia's active participation for the solution of many conflicts is essential," he told Putin.

The Russian president saluted Russian-NATO cooperation in battling terrorism, mentioning Moscow's aid to NATO in Afghanistan and the Mediterranean in particular, reports AP.

"Our cooperation is developing and developing successfully according to our estimation," Putin said before journalists were ushered out of the room.

Russia signed a partnership agreement with NATO in 2002, outlining cooperation in counterterrorism, nonproliferation, peacekeeping and other fields. At the same time, it has continued to voice concern about the alliance's eastward expansion.