A helicopter crashed in Kashmir on Monday. It carried aides to President Gen. Pervez Musharraf. 4 people are dead. 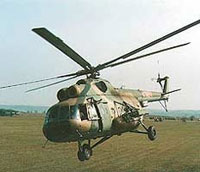 The army blamed a technical defect. But it was said the U.S.-allied leader was not in danger. But the crash revived concern for Musharraf's safety as his war against Islamic militants strengthened. 80 were killed and 50 troops missing in clashes near the Afghan border.

Musharraf flew with his retinue on three choppers to Pakistan's portion of the disputed Himalayan region on Monday to commemorate the second anniversary of the Oct. 8, 2005, earthquake that killed nearly 80,000 people.

"The president was in some other chopper and he safely reached where he had to go," Arshad said.

The crash happened two days after Musharraf swept a presidential election, whose results will only be made official after the Supreme Court rules on petitions filed by opponents. They dispute his eligibility to run for a new five-year term as he still holds the post of army chief.

The dead included a cameraman for state Pakistan Television, a military intelligence brigadier and two soldiers, officials said. The president's spokesman, Rashid Qureshi, who suffered a burn to his right hand, was among five passengers injured.

The army launched an inquiry into the crash at Mujhoi, a village 20 kilometers (12 miles) south of Muzaffarabad, the capital of Pakistani Kashmir. Witnesses said minutes before the Puma chopper went down, two other army helicopters had flown past.

Naseer Ahmed, a resident, said the noise of the chopper's engine had suddenly grown louder and the pilots found level terrain for an emergency landing. He said several passengers jumped from the aircraft before it hit the ground and exploded into flames.

While there was no indication of hostile fire, the crash refocused attention on the security of Musharraf, who has survived several assassination attempts.

The country's previous military ruler, Gen. Zia-ul Haq, died in an unexplained explosion on board a Pakistani military aircraft in 1988 along with U.S. Ambassador Arnold L. Raphael and several other top generals.

Five weeks ago, militants demanding the army withdraw from the region abducted more than 230 soldiers in South Waziristan _ a major embarrassment to the army. Last week, the militants executed three of the soldiers and threatened to kill more.

Up to 50 Pakistani troops were missing Monday after militants attacked security posts and a foot patrol near the town of Mir Ali, the army said. About 60 suspected militants and 20 soldiers died in two major clashes Sunday, it said.

A security official in Miran Shah, the region's main town, said army helicopters and jets bombarded militant positions in several villages on Sunday. He said informers had told security forces that two low-ranking Arabs with al-Qaida and an Uzbek were among the dead.

About a dozen civilians, including women and children, died when a stray mortar struck their home in Mir Ali, said the official, who spoke on condition of anonymity because he was not authorized to speak to the media. It was unclear who fired the mortar.

Asked about reported civilian deaths, army spokesman Arshad said security forces had fired only at targets from which they were being attacked.

Angry residents who had fled villages near Mir Ali arrived in Miran Shah on Monday.

"Oh God! Kill those who killed our innocent people and made us homeless," said Ahsan Ullah. He said about 300 people had left the area.

The deepening violence in northwestern Pakistan has sharpened domestic criticism of Musharraf's support of the U.S.-led war on terrorism. Pakistani troops have fought off-and-on battles against Taliban and al-Qaida militants who took refuge here from the U.S.-led invasion of Afghanistan in 2001.

Over 200 Pakistani soldiers have died in the past three months, according to figures compiled by The Associated Press from the army and other officials.