Authorities evacuate about 200 homes in northern Florida because of wildfire

Authorities evacuated about 200 homes in northern Florida on Tuesday as two fires totaling 130,000 acres (52,610 hectares) raged on the Georgia-Florida border. 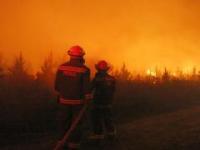 Authorities evacuate about 200 homes in northern Florida because of wildfire

Officials also prepared to evacuate staff in southeast Georgia's Okefenokee National Wildlife Refuge, as the largest recorded blaze in that state's history drew near to a part of the park that has served as a fire crew command post.

Florida is under a fire-induced state of emergency, with high wind and tinder-dry conditions spawning some 240 blazes over 50,000 acres (20,235 hectares). So far no injuries have been reported, and only a handful of houses have been destroyed or damaged.

Sheriff Joey Dobson in Florida said the fire forced evacuations around Taylor, a small town with one store and no cell phone coverage.

"All the homes are scattered about various roads in the county," he said. "We are just getting prepared for the fire to come into this area."

Elsewhere in Florida, evacuations were ordered late Monday after three fires grew together in north-central Alachua and Bradford counties, forming a 16,000-acre (6,475 hectares) blaze. Earlier that day, 30 homes in Florida's Panhandle were evacuated under an advancing fire.

Firefighters had hoped to fortify a border highway with fire breaks to keep the blaze from crossing, but abandoned those plans when smaller spot fires ignited south of the main blaze, said Russell Hubright, a spokesman for the joint state-federal team fighting the Georgia fires.

"There's enough spotting and fire activity that it's unsafe for fire crews to get in there," Hubright said.

The Georgia Forestry Commission has said the large blaze was ignited three weeks ago. The agency said it was caused by a fallen tree striking a power line, but it suspects arsonists may have started six smaller fires that later flared up nearby.

Lingering smoke and haze from around Florida have also forced schools to limit outdoor activities and prompted public health warnings in the Tampa area.