33 lost in floods in central Vietnam 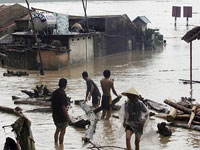 33 lost in floods in central Vietnam

The latest floods, the third to hit the area in three weeks, began Friday, killing people in seven coastal provinces, including 10 in Phu Yen province.

Officials feared even more damage would be unleashed by tropical storm Peipah, which was expected to reach Vietnam on Friday.

"The last two floods already caused a lot of hardship," said Vo Thanh Tien, a disaster official in Binh Dinh province. "Now another one is coming."

Six people were killed in Binh Dinh and two others were reported missing since last weekend, Tien said, adding that hundreds of thousands people now face food shortages because their provisions have been wiped out.

In the neighboring province of Quang Ngai, six people drowned over the weekend. Landslides on Monday killed two workers, who were trying to restore telephone service in an isolated area, said disaster official Dang Thao.

Nine people were killed in four other provinces.

About 300 old houses in the town of Hoi An, a UNESCO World Heritage site, were flooded with nearly a meter (3 feet) of water, Mayor Le Van Giang said.

After years of regular flooding, the foundations of many of the riverside city's buildings have been weakened, Giang said. Hoi An needs to speed up its efforts to strengthen and preserve its architectural landmarks, he said.

"We are seriously concerned, as these old houses are the soul of Hoi An," Giang said. "If they are ruined, Hoi An will not be Hoi An anymore."