Harley-Davidson reports a wider than expected loss for the fourth quarter on Friday. 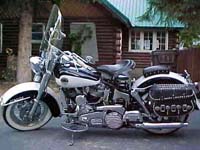 Falling motorcycle sales and restructuring costs brought the company to a $147.2 million loss for the quarter. Including discontinued operations, Harley-Davidson lost $218.7 million. As the difficult economy kept wallets closed and credit short, sales in the U.S. dropped by 27.9%.

The company recently announced that it would introduce a dozen of its motorcycles to the Indian market. International sales dropped by only 10.3% during the fourth quarter, far less than sales in the U.S.

The motorcycle giant plans to reorganize its York, Pa. manufacturing plant to focus on motorcycle assembly, metal fabrication and paint, having reached a seven-year labor agreement in December. It also consolidated three vehicle test facilities into a single site in Arizona. The company expects that the restructuring will streamline operations and provide essential cost savings on the manufacturing end of the business.

“It is a tribute to our employees at York that they understood we could not continue on the course we were on, and they worked with us to find a better way,” said CEO Keith Wandell.

Looking ahead to 2010, the company will reduce its shipments of motorcycles by 5% to 10% to a level of 201,000 to 212,000 bikes. While restructuring costs will hit the company for another $175 million to $195 million this year, the payoff in future savings will be worth it, the company said.

It expects cost saving from the restructuring, an estimated $240 million to $260 million per year upon completion, to strengthen the motorcycle manufacturer in the long term.

Still, shareholders might be uncertain about the future of the iconic American brand, as shares of Harley-Davidson fell by nearly 7% in early trading on Friday.

Forbes.com has contributed to the report.