Power company PPL Corp said on Thursday it has signed an agreement to sell its natural gas distribution and its propane businesses to UGI Corp unit UGI Utilities for about $268 million. 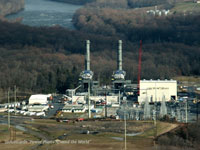 PPL said the businesses represented only about 1 percent of its overall earnings from ongoing operations in 2007 and it expects the deal to close before the end of 2008.

PPL, formerly known as PP&L or Pennsylvania Power and Light, is an electric company headquartered in Allentown, Pennsylvania, USA. It currently controls over 11,000 megawatts of electrical generating capacity in the United States, primarily in Pennsylvania and Montana , and delivers electricity to customers in the United Kingdom and Latin America. *Update: PPL recently sold all subsidiaries in Latin America and it's Telcom subsidiary (PPL Telcom), and is now based solely in the US and UK(Known as Western Power Distribution, a transmission & distribution service provider, or EDC for short).

The majority of PPL's power plants burn coal, oil, or natural gas. PPL recently has invested heavily in peaking plants. These plants require few operators and have a high profit margin due to their ability to rapidly come online when the price of electricity spikes. PPL's largest plant is the Susquehanna Steam Electric Station, a 2,352 MW nuclear power plant PPL Susquehanna, located on its namesake river seven miles northeast of Berwick, Pennsylvania.

The company is publicly-traded on the New York Stock Exchange under ticker symbol NYSE: PPL.

PPL is the seventh largest employer in the Lehigh Valley region of Pennsylvania. The company's headquarters is based in the PPL Building, the tallest building in Allentown.