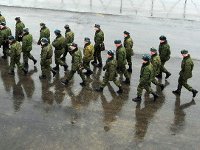 Both Soviet and Russian officials were promising to make the Russian army professional ten and even fifteen years ago. It never happened. Moreover, as it turns out today, the Russian army will remain conscript-based in 15 years as well. Gen. Nikolay Makarov, the Chief of General Staff, admits that the army reform in Russia is coming too late. According to the official, Russia has to follow the example of young NATO members, such as the Czech Republic and Poland. Will the experience of small countries will be good for the world's largest country? What kind of army does Russia need today? Does it need the professional army that will be able to react quickly and professionally to possible attacks? Or does the county need the army the way it exists today?

Nikita Khrushchev stated at the XXII Congress of the Communist Party of the Soviet Union in October of 1961: "The current generation of Soviet people will be living under communism!"

It is an open secret that neither the previous nor the future generations saw any communism in the country.

In 2001, Russia's then-Defense Minister Sergei Ivanov stated that his department was working on the plan to introduce the contractual basis for the armed forces of Russia already in 2004. Ivanov particularly stated that the introduction of the contractual basis "was a historical choice and we would not have another possibility." Ivanov did not specify when exactly it could be possible. "This is a very lengthy process," he said. Governmental experts believe, however, that the transition process will last for approximately ten years.

On April 4, 2011, President Medvedev released a portion of "good news" for conscripts and their parents. The draft system in Russia will be preserved for at least 10-15 years.

"I believe that in the next 10-15 years, our recruiting system should combine both conscription and contracting," Medvedev said at a meeting with paratroopers at a military base near Moscow. "We should do everything possible to make contract service attractive and prestigious."

He said the monthly salary for an entry-level military specialist may be doubled to around 30,000 rubles ($1,000), RIA Novosti reports.

However, Russia currently can not afford reforming the army by switching to the contractual service.

"You won't believe it but weaponry is cheaper than a good contractual soldier. If we calculate, the spending will be colossal. The previous program to introduce the contractual basis did not work just because it was done formally," Newsweek quoted Russia's incumbent Defense Minister Anatoly Serdyukov as saying.

The minister added that the government was not going to shelve the idea of the contractual army. It is the number of such servicemen that is going to be cut - to 90-100 thousand people.

"If we save money on other directions, we will return to this idea, but we will be well-prepared," Serdyukov said. He also added that the budget of the new program was three times as large as the budget of the current program - 19 trillion rubles.

Officials representing Russia's Audit Chamber confirmed in the summer of 2010 that the program to recruit professional servicemen for the Armed Forced for 2004-2007 "failed successfully."

On March 18, 2011, Anatoly Serdyukov said after the meeting with President Medvedev that the armed forces would be downsized to one million personnel by 2016. There will be 220,000 officers, as well as 425,000 soldiers and contractual sergeants. However, Nikolai Makarov says that 425,000 contractual soldiers is only a start.

"A contractual soldier in the armed forces of Poland receives $1,100 a month. In the Czech Republic the amount is lower - $700. Servicemen also receive $500 as subrental allowance. Russia will also reach this level for contractual soldiers," Makarov said.

This sounds like a moth-eaten story that is hard to believe.

There were no funds for the reform in the very beginning of it. As it appears, there is no money for the reform now either. What kind of army does Russia really need? A professional army or the one we have now, plagued with bullying?

As many as 200,000 Russian young men ignore call-up orders every year. They also ignore the threats of criminal persecution for dodging the service.