A group of sculptures walled in the Winter Palace of the Hermitage in St. Petersburg was discovered during the works to install an electrical control unit. The found sculpture was created at the end of the 19th century by Vladimir Beklemishev. 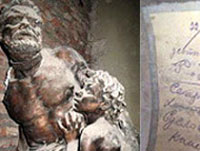 The sculpture was found in the wall of the Church stairways of the Winter Palace when electricians were installing the electrical control unit in the wall.

“They opened the brickwork of the wall to install the unit. As soon as electricians took out the first two bricks, they saw an arm inside the wall. A flashlight outlined a walled in statue. It was a statue of a man and a boy made of bronze-tinted plaster,” a message on the museum’s website said.

Employees of the Hermitage do not know why the sculpture was walled in. Restorers, art experts and historians will have to find an answer to this question, Itar-Tass reports

Vladimir Beklemishev, the sculptor, presented his creation to the Fine Arts Academy in 1918. During the 1920s, the sculpture was moved to the Museum of Revolution, which used to be housed in the Winter Palace during that time. Beklemishev’ sculpture is listed in the catalogue of the museum as a lost item.

“It is very surprising that the creation, which was thought to be lost for so many years, has been discovered on the threshold of the sculptor’s anniversary. In 2011 it will be 150 years since his birthday,” an art expert said.

Beklemishev made the sculpture titled “The Fugitive Slave” in 1891 after his trip to Italy. Beklemishev’s works can be found in the Russian Museum, the Tretyakov Gallery, the Hermitage and other well-known museums of Russia.