Over 400 factories closed in China over water pollution problem

China's environmental watchdog has closed down 400 factories since it started a national campaign in July to tackle water pollution, an official said Tuesday. 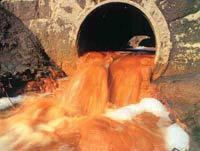 Over 400 factories closed in China over water pollution problem

Tian Weiyong, deputy environmental supervision chief of the State Environmental Protection Administration, said another 762 companies and projects had been suspended or fined due to environmental violations. He did not give details about the affected companies or their alleged violations.

The factories paid fines of 733 million yuan (US$97 million; EUR 71 million), Tian said. The campaign aimed to clean up industries along some of China's major waterways, including the Yellow and Yangtze rivers.

"All industries are required to pass environmental appraisals before starting construction. If not approved, the projects are forbidden," Tian said in a statement on the Web site of the central government.

In August, the government said it was planning heftier fines for water polluters.

A draft amendment to a decade-old water pollution law would remove a 1 million yuan (US$132,000; EUR 96,830) cap on fines for water polluters, and would allow penalties of 20 percent to 30 percent of the direct economic losses caused by a spill or pollution, the China Daily newspaper reported.

China has some of the most polluted cities in the world after two decades of breakneck economic growth, and the government has been losing ground in recent years in trying to balance environmental concerns with economic growth. Air pollution has been a worry for Beijing as it gears up for the Olympic Games, to be held Aug. 8-24, 2008.