Thailand's interim prime minister, Surayud Chulanont, affirmed Thursday that he has no immediate plan to step down, despite criticism of his government and rumors that he might resign. 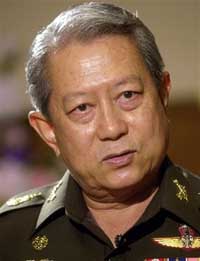 "I will try my best. If there is no major obstacle that affects my work, I am determined to continue," he said at a news conference a day after being discharged from hospital for a three-day medical checkup. Doctors said he had no major health problems.

Surayud, 63, was named premier after a Sept. 19 coup ousted elected Prime Minister Thaksin Shinawatra, who had been accused of corruption and abuse of power.

He has come under criticism amid a run of bungled government policies and concerns that his administration will not meet its stated timeframe for drafting a constitution and holding elections by the end of the year.

Surayud said he could not predict whether there would be any "obstacles" for the rest of his term, but if there were, he would try to solve them by "political means."

"I will not use other means that will cause problems to the country. I will use nonviolence," he said, apparently meaning he would not try to rule by emergency decree or call out the military to keep order.

Besides criticism from the public and the media, there are signs that Surayud is at odds with the commanders of the country's military, who installed him after toppling the elected government.

Some members of the military council that is the power behind the government have expressed concern that Surayud should take a much harder line against Thaksin's supporters, and would prefer to clamp down harder on political dissent.

Protesters have been holding small but growing rallies calling for the restoration of democracy, even though the government has said elections - originally promised for September - will be held by the end of the year.

Surayud, asked if the generals might stage another coup to oust him, said he had been assured by the military that such speculation was nothing more than rumors. Surayud said the council would try to ease the situation and prevent any violence, referring to the potential of escalating protests against his government.

He said the military's Council of National Security, headed by army commander Gen. Sonthi Boonyaratglin, "has no plans to change the prime minister."