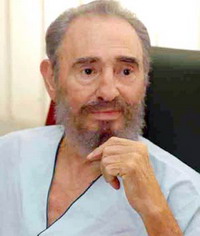 Fidel Castro accused U.S. Government of discharging “monster”. The American Court rules allowing a jailed Cuban militant who was once a U.S. operative to post bond.

"The government of the United States and its most representative institutions have decided the liberation of the monster beforehand," said the statement, which bore Castro's signature.

The letter was the third in recent days signed by the ailing Cuban leader, who has not been seen in public for more than eight months.

Castro, 80, announced July 31 he had undergone emergency intestinal surgery and provisionally ceded his presidential functions to his 75-year-old brother, Raul, the defense minister.

Fidel Castro's medical condition and actual ailment remain a state secret, but he is widely believed to suffer from diverticular disease, a common affliction among the elderly that causes inflammation and bleeding in the colon.

On Friday, Cardone ruled that Posada could be released on US$250,000 (EUR186,200) bond. He is being held at the Otero County jail in New Mexico on charges he lied to immigration authorities in a bid to become a naturalized citizen.

Posada, a former CIA operative, is wanted in Cuba in the 1976 bombing of a Cuban jetliner that killed 73 people, a charge Posada denies. Castro repeatedly has accused the U.S. government of protecting Posada.

Castro's statement noted that, while Cuba and Venezuela accuse Posada of violent acts, the U.S. government has been holding the 79-year-old on a far less serious charge.

Castro also drew a connection between "the criminal and terrorist character of the accused" and the current U.S. government.

"The most genuine representative of the system of terror that has been imposed upon the world by the technological, economic and political superiority of the most potent power in the world is, without question, George W. Bush," it said.

In a related development, the government scheduled a Wednesday morning news conference in Havana with relatives of the airliner bombing victims.

Posada is a longtime foe of Castro, who publicly accused him at a 2000 presidential summit in Panama of plotting to assassinate him. Posada was soon afterward arrested in Panama and convicted on lesser charges before walking free in 2004, after being pardoned by Panama's president at the time, Mireya Moscoso.

Cuba accuses Posada of being the mastermind of the 1976 Cubana airliner bombing off the coast of Barbados. Among those killed were the young members of a Cuban fencing team returning home after a regional competition.

Venezuelan authorities want to extradite Posada for trial in that South American country, where he is a naturalized citizen. Posada was arrested in Venezuela a few days after the bombing and escaped from prison there in 1985 before a civilian trial in the case was completed.

Posada was detained in Florida in May 2005 for entering the United States illegally. A U.S. immigration judge ruled that he could not be sent to Cuba or Venezuela, citing fears that he would be tortured.

Posada trained with the CIA for the 1961 Bay of Pigs invasion and served in the U.S. Army in the early 1960s. In 1965, he allegedly plotted to overthrow the Guatemalan government and blow up a Soviet or Cuban freighter in Mexico, according to the FBI. In 1967, he moved to Venezuela, eventually leading its counterintelligence agency, and was running his own security firm in the mid-1970s.

In 1973, Posada was investigated by the CIA for allegedly smuggling cocaine, but was cleared after he convinced interrogators he was "guilty of only having the wrong kind of friends," a declassified document says. The same document says the CIA "formally terminated" its relationship with him on Feb. 13, 1976.