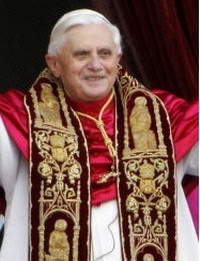 The faithful worldwide is invited to join the prayerful thanks to God with Pope Benedict XVI who will mark his 80th birthday with Sunday Mass in St. Peter’s Square.

His birthday is actually on April 16, the day after Sunday, and three days ahead of the second anniversary of his election as pontiff to succeed the late John Paul II.

The Vatican said on Tuesday that the German-born Benedict will celebrate the Mass on the steps of St. Peter's Basilica together with cardinals, bishops and some priests from the diocese of Rome.

As pontiff, Benedict also serves as bishop of Rome.

Faithful worldwide are "invited to join with Holy Father Benedict XVI in elevating to God the Father an intense prayer of thanksgiving for his 80th birthday and the second anniversary of his election," the Vatican said.

After a heavy schedule of long, public ceremonies for Holy Week, which concluded with Easter, Benedict is spending a few days at the papal summer estate in Castel Gandolfo in the hills of Rome. He will interrupt his stay for a few hours on Wednesday to hold the traditional weekly general audience with pilgrims and tourists at the Vatican.