Police were questioning two top editors and two directors of Kenya's newspaper over a report that an unnamed Cabinet minister was trying to arrange an assassination of former President Daniel arap Moi's son. 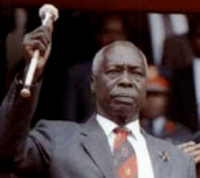 The Standard newspaper cited what the newspaper described as a taped confession by the would-be assassin in Monday's story. The alleged target of the hit, Gideon Moi, is an opposition member of parliament representing the Baringo Central region in Kenya's Rift Valley Province.

The motive, according to the newspaper, involved financial documents.

Gideon Moi could not immediately be reached for comment.

Internal Security Minister John Michuki said: "I am not aware of such a plot."

Police spokesman Eric Kiraithe confirmed the men were being asked to give a statement on "the serious allegations published in today's Standard."

Before going in for questioning, the paper's Deputy Chairman Paul Melly said he and his colleagues went to the police in response to a summons and that they would provide investigators with a copy of the taped confession.

Last March, masked, plainclothes police carrying assault rifles staged a midnight raid on The Standard and its sister television station, burning tens of thousands of newspapers in the most dramatic attack on the press in Kenya's history.

The closures of The Standard and the Kenya Television Network marked the first time a Kenyan government has shut down a major media company and followed the detentions of several journalists.

Kipkoech Tanui, managing editor of The Standard's weekend editions, said his colleagues were separated from their attorneys Monday during questioning.