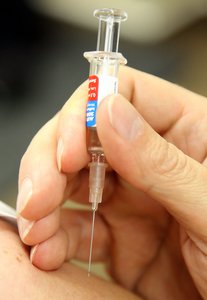 Bristol-Myers Squibb and Pfizer may have a new drug in the pipeline that could hold the key for stroke victims, according to the results of trial released Sunday.

A Bristol-Myers Squibb and Pfizer apixaban drug shows promise in preventing strokes in a clinical study, the companies said Sunday. In a clinical trial, investigators reported that a major Phase III study comparing apixaban with warfarin demonstrated that the experimental drug reduced the risk of stroke or systemic embolism by 21 percent, says The State Column.

The 18,201-patient study marked the first time that one of several agents in a race to replace warfarin proved superior to the half-century-old workhorse blood thinner on all three measures of efficacy, safety and improved survival.

"We are delighted with these results," said Christopher Granger, a researcher at Duke University's Duke Clinical Research Institute and lead investigator of the study. The results "have profound implications for the opportunity to improve care for patients with atrial fibrillation."

Together with previous positive studies involving two rival drugs, the results add to the evidence that warfarin's days as one of cardiology's go-to blood thinners are numbered, reports Wall Street Journal.

Doctors had been eager for a replacement for warfarin because patients need regular blood tests to ensure they're getting a safe, effective dose of the older drug.

Eliquis was especially impressive because there was evidence it beat warfarin even in patients who were getting the optimal dose, Harvard University cardiologist Elliott Antman said in an interview. Antman is leading studies of another potential competitor, Daiichi Sankyo Co.'s edoxaban.

If a patient is stable on warfarin and doesn't mind a monthly doctor's visit for a blood test, there may be no reason to switch to a new, more expensive medicine, Ralph Brindis, senior adviser for cardiovascular disease at Northern California Kaiser Permanente, said in an interview. Warfarin, a generic drug, costs $4 a month, plus about $20 for blood tests, according to a January presentation by the University of Utah Health Care Thrombosis Service, accirding to Bloomberg.