The federal government has cleared 13 new stem cell lines for testing, bringing to a close nearly a decade of restrictions. 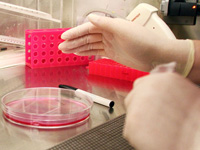 The news from the National Institutes of Health should provide some relief to companies that have been squeezed by limited funding from both the federal government and the private sector.

President Obama lifted the Bush-era ban on federal funding for new stem cell research last spring. However, more than $21 million worth of funding was on hold until the NIH named new stem cell lines that are ethically appropriate for testing.

The prior policy had limited taxpayer-funded research to about 21 stem cell lines, those already in existence as of August 2001. Experts say the new batch of lines are far more promising candidates for successful research.

Wednesday's announcement had been expected for months and represents more of a symbolic positive for industry than a real financial gain. Federal research grants are almost exclusively distributed to academic research centers and will not flow directly to companies.

Most stem cell companies, which are primarily startups, will continue to struggle financially as funding from the venture capital market has been decimated by the economic downturn.