Gunman sends videos, writings and photographs to a US television network

The Virginia Tech gunman sent videos, writings and photographs to a U.S. television network in the middle of his shooting spree, authorities said Wednesday. 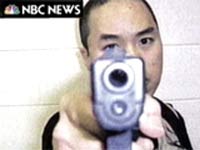 Gunman sends videos, writings and photographs to a US television network

Cho Seung-Hui sent the material to NBC News sometime after murdering two people early Monday morning, but before he fatally shot another 30 people in a classroom building and turned a gun on himself.

"You had a hundred billion chances and ways to avoid today," Cho says in one rambling video clip. "But you decided to spill my blood. You forced me into a corner and gave me only one option."

He also specifically mentions Eric Harris and Dylan Klebold, the teenagers responsible for the 1999 Columbine High School massacre, referring to them as "martyrs."

NBC News did not receive the material until Wednesday morning because of an incorrect mailing address, and handed the package over to investigators. The envelope is time-stamped 9:01 a.m. ET Monday.

It's unclear when Cho began working on the material, and how much -- if any -- was created after his initial shooting spree. In some of the videos he seems to refer to his rampage in the past tense.

"This may be a very new, critical component of this investigation. We're in the process right now of attempting to analyze and evalute its worth," Col. Steve Flaherty, superintendent of Virginia State Police, told reporters.

NBC Nightly News anchor Brian Williams called the material "disturbing" and a "multimedia manifesto." It contains 27 video files of Cho describing his hatred towards the wealthy, and images of him holding weapons.

The videos were embedded into the paragraphs of a large 1,800-word document, suggesting Cho had put a great deal of work into the manifesto, the AP reports.

Cho was born in South Korea and had been a permanent U.S. resident since 1992. At Virginia Tech, formally known as Virginia Polytechnic Institute and State University, teachers remembered him as a withdrawn student who penned stories filled with violence and profanity.

“Richard McBeef'' and “ Mr. Brownstone,” plays written by Cho, were posted on the Web yesterday by former classmate Ian McFarlane, an employee at America Online Inc. In the first of the dramas, a son tries to choke his stepfather and threatens him with a chainsaw; in the second, students plan to kill a teacher.

Cho scared classmates, professors said. At a teacher's request, professor Lucinda Roy agreed in late 2005 to teach Cho one-on-one. The student often showed up wearing sunglasses and a cap pulled low over his eyes, she said.

“He seemed to be crying behind the sunglasses,'' Roy said today in a televised interview. “There was this steady tone of anger in his writing, expressing emptiness and fury about himself and others around him. I really felt very strongly he was suicidal. It was like talking to a hole.''

Roy said campus police offered to post an officer outside the classroom during the private tutoring. Police took no action against Cho because he hadn't threatened anyone, Bloomberg reports.

A handful of U.S. college and university campuses dealt with threats following the massacre, according Agence France- Presse. Minnesota University evacuated eight buildings today after receiving a bomb threat, though a search didn't locate anything unusual, the school said on its Web site. Classes are expected to resume as usual tomorrow, it said.

As Pravda.ru previously reported the family of the gunman in the Virginia Tech shootings had struggled while living in Korea, and emigrated to the U.S. to seek a better life.

Cho Seung-Hui's family lived in a Seoul suburb in a rented basement apartment — usually the cheapest in a multi-unit building.