Russia thrashed Denmark 9-1 while the Czech Republic, Finland and the United States also posted easy victories on the opening day of the world ice hockey championship on Friday. 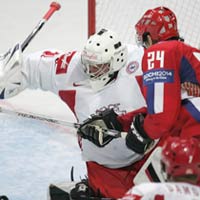 Hosts Russia, chasing their first global title since 1993, got off to a flying start against the Danes, scoring three times in the first four minutes and adding five more before the game was only half over.

"We did what we wanted, scoring three goals early in the game," Russia captain Pyotr Schastlivyi told reporters.

"But this is only a start, so we must maintain this level."

The Russians lead Finland on goal difference in Group D.

Timo Parssinen led Finland with a pair while Pekka Saravo, Sean Bergenheim and defenseman Petteri Nummelin, playing in his 13th world championship, added a goal each.

Moscow is hosting the world championship for the first time since 1986 when the Soviet Union became the last team to triumph on home ice at the old Luzhniki Palace.

Russian President Vladimir Putin was scheduled to open the championship at the new 14,000-seat Khodynka Arena on Friday evening but did not attend the event which coincided with the death of Russian musician Mstislav Rostropovich, Reuters reports.

St. Louis Blues forward Lee Stempniak had a goal and an assist Friday to lead the United States past Austria 6-2 in the preliminary round Group B match at the world hockey championships.

In Moscow, Timo Parssinen scored two power-play goals in the second period to help Finland open with a 5-0 win over Ukraine, and nine different Russians scored in a 9-1 victory over Denmark.

The United States is seeking its first medal since winning bronze at Prague in 2004. During the last worlds at Moscow in 1986, the U.S. team lost in the preliminary round robin — but avoided relegation.

"I thought it was critical that we get off to a good start," U.S. coach Mike Sullivan said. "Certainly, if you can win the first game it takes a little bit of pressure off as far as your ability to advance in this tournament."

Boston Bruins forward Phil Kessel, who helped the United States win world junior gold in 2005, opened the scoring less than 2 minutes into the game, coming from behind the net to fire the puck over Reinhard Divis' glove.

The Oilers' Tobias Petersen made it 2-0 at 10:22 when the puck bounced off his skate and through Divis' five-hole. Raimund Divis put Austria on the board at 14:51, but Stempniak converted a two-man power play less than 3 minutes later to restore the two-goal lead.

Chris Clark of the Washington Capitals scored 24 seconds into the middle period to make it 4-1. Austria's Oliver Setzinger closed out the second-period scoring at 10:51.

Erik Cole and Brandon Bochenski scored in the final period to put the game out of reach, the AP reports.