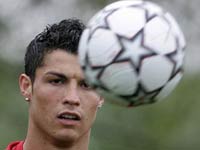 "It is a special night," Ronaldo said. "It is amazing and a big honor for me to win trophies like this in the English Premier League. I am very proud.

"My colleagues have voted for me and that is fantastic because the players know the qualities of players."

The 22-year-old Portugal international has been a key member of United's side this season as it bids to repeat its 1999 treble of English Premier League, European Champions League and English FA Cup trophies. He's scored 21 goals for United so far this season.

"I want to keep working hard and getting better because these trophies have now given me more motivation," Ronaldo said. "At this moment, I am consistent. I am more mature now and I am playing better."

Ronaldo's future at United was uncertain at the beginning of the season after he clashed with United teammate Wayne Rooney in the World Cup quarterfinal match between Portugal and England in July. He publicly considered leaving but was persuaded to stay.

"Everything is right this season and I am really enjoying it," said Ronaldo, who signed a five-year contract April 13.

"I am still young and I am learning more every day. I have much time to learn more and improve myself. I try to improve all aspects of my football -- not only in training but also in games."

Ronaldo is the first United player to win the senior award since Ruud van Nistelrooy in 2002. Rooney has won the young player of the year award the past two seasons, the AP reports.

Although Ronaldo has been below par in United's last two games by his own high standards, his confidence should be boosted by the two goals he scored in the seven-goal rout of Roma in the last round.

His performance that night in particular drew comparisons with legends such as Pele and Diego Maradona from team-mate Patrice Evra.

At the time, Ferguson did little to dissuade anyone from the view he could reach that standard, although the Scot now admits it is slightly over the top.

"Cristiano has this new publicity comparing him with Pele and Maradona. Of course it is ridiculous because he is only 22," said Ferguson.

"He has a lot to go before he can be considered at that level. He has to play consistently in European games and also World Cup games before you can judge how great he is.

"But that is all in front of him.

At this moment he is the best player in the world and I don't say that lightly because there are so many fantastic players around, tribalfootball.com reports.

"His season has been incredible, 21 goals from a winger is exceptional. His position in the game at this moment is very high."