Georgia's Supreme Court directed to free a young black man who was sentenced to 10 years for oral sex with white teenager. 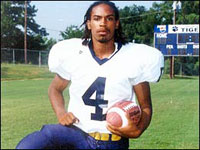 The court ruled 4-3 that Genarlow Wilson's 10-year sentence was cruel and unusual punishment.

Wilson was convicted of aggravated child molestation following a 2003 New Year's Eve party at a hotel room where he was videotaped having oral sex with a 15-year-old girl.

He was also charged with raping another 17-year-old girl at the party but he was acquitted by a jury.

Chief Justice Leah Ward Sears wrote in the court's majority opinion that the severe punishment makes "no measurable contribution to acceptable goals of punishment" and that Wilson's crime did not rise to the "level of adults who prey on children."