Garth Brooks played the final show of the concert series that ended his nine-year touring hiatus. 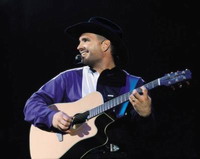 The show was simulcast to fans in movie theaters across North America and Europe on Wednesday. The 45-year-old country singer had retired from touring to be a stay-at-home dad.

As he had done for the other eight Kansas City shows, Brooks opened by rising from a hole in the stage while playing "The Fever." But he appeared stiff during the first 90 minutes of his performance as he played a string of hits that included "Friends in Low Places" and "The Dance," wrote Timothy Finn, a reviewer for The Kansas City Star.

Brooks then told fans the simulcast had ended and promised the rest of the night was for them.

"Instantly, his mood changed and so did theirs," wrote Finn.

The next 45 minutes included Brooks singing "That Summer," "Much Too Young (To Feel This Damned Old)" and "Two Pina Coladas." He also offered a solo acoustic medley of songs from James Taylor, Bob Seger and George Strait.

The crowd joined in as Brooks closed with "American Pie."